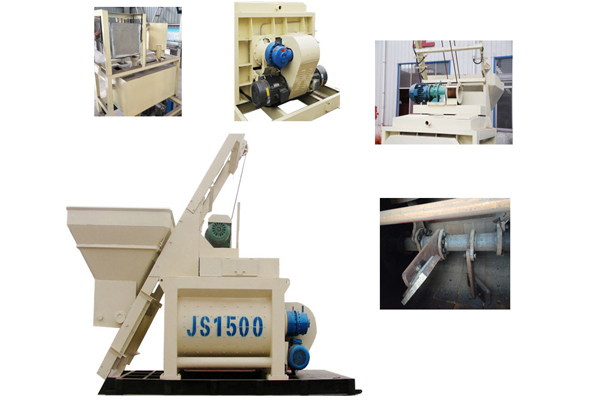 The structure of JS1500 forced concrete structure is complex and consists of seven components.It is a strong power forced mixer machine that can produce 90 cubic meters concrete per hour.

Motor is driven from high speed to low speed of the V-belt and planetary gear reducer and transfers power to the mixing spindle through the spline shaft and spline shaft hub.Set a synchronous drive shaft in the middle of the two reducer at the same time, to guarantee the synchronization of the two mixing spindle.It gets the advantages of smooth transmission, transmission torque, cost-effective.

As one of the core components of the mixer, JS1500 concrete mixer lubrication device will directly affect the mixer efficiency and service life. Lubrication system consists of electric lubrication pump, tubing and other components; Play the role of protecting bearings and shaft end.

The mixing cylinder of this machine is a double-barrel bended by generous steel plate with strong yield force. The supporting part can also make the cylinder body rigid enough to ensure the parallelism and single concentricity of the shaft.

Mixing device consists of the main shaft, stirring arm, blade, scraper and other components, which is equipped with seven stirring arm on two mutually parallel spindle, the same spindle on the adjacent two mixing arm was 60 angle distribution. The relative angle relationship of two spindles is fixed. This fixed relationship is ensured by the coupling between the two reducer.

It consists of the discharge body,cylinder and proximity switches.In automatic operation, it is generally set at full open, fully closed and half open three states.