The concrete is commonly used for making concrete blocks that is a mixture of powdered portland cement, water, sand, and gravel. This produces a light gray block with a fine surface texture and a high compressive strength. A typical concrete block weighs 38-43 lb (17.2-19.5 kg). In general, concrete mixture used for blocks has a higher percentage of sand and a lower percentage of gravel and water than the concrete mixtures utilized for general construction purposes. This produces a very dry, stiff mixture that holds its shape when it is removed from the block mold.

If granulated coal or volcanic ash is used instead of sand and stone, the resulting block is commonly called a cinder block. This produces a dark gray block with a medium-to-coarse surface texture, good strength, good sound-deadening properties, and a higher thermal insulating value than a concrete block. A typical cinder block weighs 26-33 lb (11.8-15.0 kg). 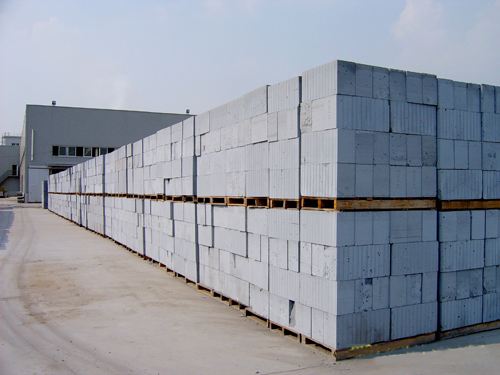 Lightweight concrete blocks are made by replacing the sand and gravel with expanded clay, shale, or slate. Expanded clay, shale, and slate are produced by crushing the raw materials and heating them to about 2000F (1093C). At this temperature the material bloats, or puffs up, because the rapid formation of gas is caused by a small amount of organic matter trapped in the combustion process. A typical light-weight block weighs 22-28 lb (10.0-12.7 kg) and is used to build non-load-bearing walls and partitions. Expanded blast furnace slag, as well as natural volcanic materials such as pumice and scoria, are also used to make lightweight blocks.In addition to the basic components, the concrete mixture used to make blocks may also contain various chemicals, called admixtures, to alter curing time, increase compressive strength, or improve workability. The mixture may have pigments added to give the blocks a uniform color throughout, or the surface of the blocks may be coated with a baked-on glaze to give a decorative effect or to provide protection against chemical attack. The glazes are usually made with a thermosetting resinous binder, silica sand, and color pigments.The production of precast concrete blocks needs not only the concrete mixer machine or whole concrete batching plant,but also needs the block making machine, heating machines and cutting machine for the whole producing and shaping of the concrete blocks.

0
0
Previous: Difference between tilting mixer and non-tilting mixer for the batch mixers
Next: types of concrete and their applications